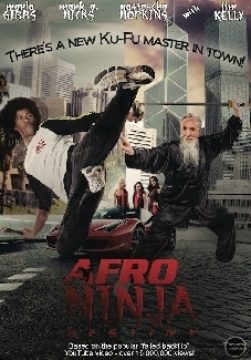 Reggie Carson has been working at the post office for over a decade. He hasn’t been promoted, his boss picks on him and he doesn’t have a girlfriend. All of this changes when Reggie and his post-office colleague, Sandra, find a thirty year old package on Halloween with magic nunchuks. The next day Reggie wakes up and finds he has a bad fro, badder abs and the baddest ninja skills around. He immediately uses these for the cause of justice and prepares for a showdown against the evil Kung Fu Master, Jerome ‘Black’ Lightning, as Afro Ninja sets out on a quest that will teach him both humility and humbleness, as well as the history of his skills and the truth about his father. Only then can Afro Ninja be the baddest dude in town.