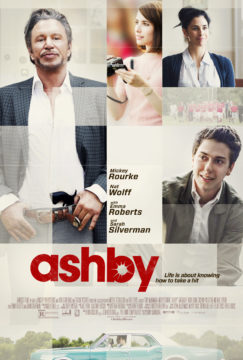 When Ed Wallis starts at a new school in a new town, his classmates quickly assume that he's a loser even though he’s the smartest and funniest guy in class. His first assignment is to write an essay about someone from an older generation, so he turns to his reclusive next door neighbour, Ashby, who agrees to help as long as Ed promises to drive him around town when he has errands to run.

What Ed doesn’t know is that Ashby is a retired CIA assassin who only has months to live. What's more, Ashby has discovered that his former handlers tricked him into killing an innocent man some years earlier and he intends to assassinate his old superiors before he dies as a way of atoning for this illegitimate killing. Ed unwittingly acts as getaway driver for Ashby as he tracks down and eliminates his old colleagues with terrifying skill and precision. In the process they form a close and endearing bond, cemented by a shared sense of humour. Ashby fills the void left by Ed’s absent father, and encourages him to reveal a hidden talent and join the school football team - much to the surprise of his classmates, and the girl he secretly loves, Eloise. He even finds the courage to stand up to his emotionally stranded mother, June, whose addiction to internet dating is becoming untenable.

But when Ed stumbles upon Ashby’s second killing, he loses the plot and quits being his driver. Impressed by the kid’s new-found confidence, Ashby promises not to make the third and final kill. Instead, he quietly goes to his death at the hands of the CIA who have, by now, discovered his recent killing spree, secure in the knowledge that Ed is well prepared to face the future without him.