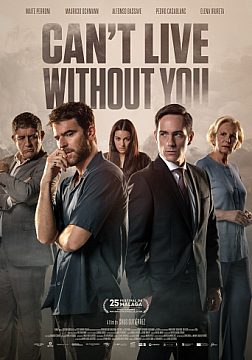 Can’t Live Without You

David is a successful businessman, who leads a comfortable life along with his boyfriend Alex, an attractive gym instructor. Alex has always wanted to be a dad and often weighs up different options for how to achieve this... Adoption? Surrogacy? David, however, has no interest in parenting whatsoever.

Everything is going well in their lives until the apparition of Blanca, David's sister who he cut off all ties with after a dark event in their past. Blanca was a drug addict and the cause of a terrible accident that started the fire that took their parents' lives. She spent six years in jail for her crime, despite the best efforts of Angel, David's ex-boyfriend, to save her during the trial. Now, out of prison and clean, she's determined to get back the only family she has left, her brother David, and is prepared to do anything to get him to accept her back into his life.