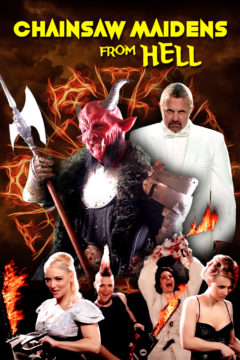 Blake is captain of his college football team and destined for a career in the pro leagues - that is, if he passes his chemistry class. But destiny has a way of tackling the toughest of players when demons invade his campus and begin to enslave the student body. A divine angel descends to give Blake an invincible suit of super football pads and send him out to battle the forces of evil. Unfortunately, the suit is missing one vital piece - the jock strap. In order to get it back, Blake must descend into the underworld and face the guardians of doom known as The Chainsaw Maidens from Hell. And he's got to do all this while studying for a chemistry quiz.