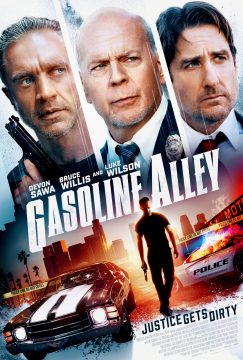 Los Angeles, 2022. Jimmy Jayne (Devon Sawa), a bruised-fisted rockabilly boss-type is sucked into the savage murder of four Hollywood starlets after the girls are found naked, tied together in a sordid motel. Jimmy was last seen entertaining one of the women at the hotel bar and becomes the prime suspect for Homicide Detectives Freeman (Bruce Willis) and Vargas (Luke Wilson). To clear his name, Jimmy takes up his own rogue investigation, bending the law in ways the police can’t. Jimmy makes big waves in the sin-filled heart of the city, relentlessly searching for the killer at high dollar parties, porn-star mansions, drug dens and auto shops until he finds a dead informant’s body in his trunk. With several suspects skating through his shadow, Jimmy bands together with Detectives Freeman and Vargas driving a hailstorm of martial arts combat and high-speed car chases. He will put his life on the line to expose the truth and stop this evil.