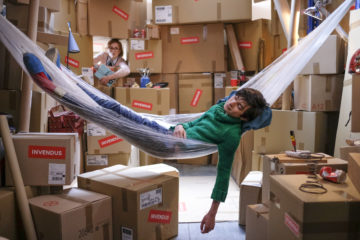 Gaston gets hired as an intern in a successful startup whose motto is “make the useless useful”. Common sense, however, always eludes him, and he has an almost supernatural ability to cause disasters... Which obviously drives his boss crazy!

Of course, his going to the office with his cat, his seagull and his goldfish in a car of the 1920’s powered by solar panels doesn’t make things easier... risking to jeopardize the future of the company, will he be able to put his genius at work to save it?

Gaston might just be the clumsiest and yet the most endearing character you have ever met. Each one of his moves is a unique sketch. He lives in a world of his own, with his animal friends brought to life in VFX!

Producer Romain Rojtman (Serial (Bad) Weddings – Woldwide BO over €184M!) brings to the big screen one of the most loved French comic books of all times: Gaston Lagaffe.