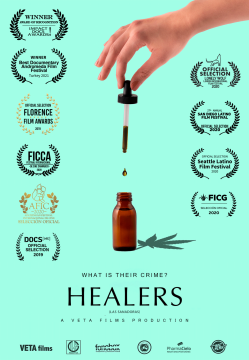 The fight for nature's alternative to pain and suffering

Healers brings us the real life stories of those using a cure that has given relief and healing thanks to the bravery of the healers who dared to apply it despite the legal risks. What started as isolated events has gained momentum and became a social justice movement that is changing Latin America.

After living in fear for their children suffering from chronic or terminal diseases, a group of women risks it all for access to an illegal treatment. When traditional medicines fail them or are financially out of reach, thousands of Latin American women have turned to cannabis for seemingly miraculous results. These strong and resolute women are effectively branded as drug dealers by ineffective laws that fail to distinguish between the medicinal and recreational uses of cannabis.

The risks these mothers, sisters and wives face to help their families are huge, but a network of these women has developed to help unite, educate and begin to lobby for change. What started as clandestine meetings to learn about cannabis cultivation and treatment methods has evolved into an inspiring movement by women who are taking control of their families' destinies.