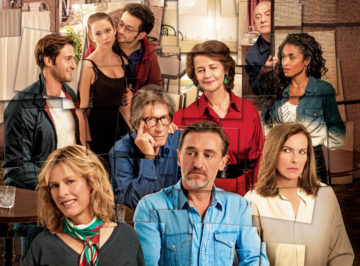 Julien is haunted by some unseen hostile force, constantly on his heels. Alex, his son, finds out that Eva, a 17-year-old high school senior, forgot to tell him that he's going to be a father. Vero, Eva's mother, who has been going through a rough period since she was born, thinks she may have to mug old ladies in order to feed her future grandchild. Elizabeth, whose husband Bertrand has disappeared into thin air, watches her home get tossed upside down on a search warrant. Lucie, exasperated by her husband Julien's paranoid delusions, is teetering on the edge of marital burnout. Serena, Julien's lover, can tell he's been lying to her. Julien can't tell that Serena is lying to him as well. Loic, Vero's eldest son, is the only stable element in the lot - except it turns out he's not really that stable at all.
And one absentee is excruciatingly present, all the time.

15 years later, Michel Blanc teams up again with the same bunch of actors after the success of Summer Things (1.5 million admissions in France).
With its sharp dialogues and characters that are both funny and shady, this dark comedy about love, family and friendship will delight you.