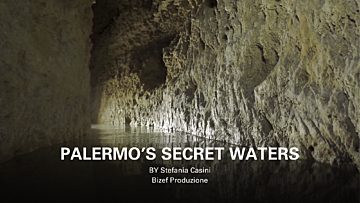 Palermo used to be the capital of the Mediterranean see thanks to the richness of the waters that Arabs have dug in the qanat. Mafia and corruption have erased part of our memories of these riches. We are off in search of the remaining traces of this Cultural heritage.

Through the use of history, science and legend, this documentary celebrates water and reveals the secret water courses that flow beneath the city; an incredible cultural and social heritage showing the complexity and extent of the influence of Arab culture. Palermo, gateway to the Mediterranean, lived through a period of economic and cultural prosperity under the Arabs. Traces of this are visible in the architecture, in the city layout and in the urban organization, as well as in the distribution and management of the most precious resource of all: water.

This incredible cultural heritage that had produced the gardens of the Conca d’Oro was subverted and destroyed in the ‘60s and ‘70s when the Mafia and corrupt developers sacked Palermo, overbuilding the Conca, thus creating a degrading urban sprawl which has also been a social disaster.

Let us investigate what is left of this important cultural dialogue that has been damaged by corruption and organized crime; we will trace it through water that flowed and flows, artfully channelled both above and below ground in intricate networks and through the fascinating Qanat system which distributes water from a multitude of springs.

The Qanat have also been used through the centuries as escape routes; giving origin to legends like the Beati Paoli .

Thanks to the experts who have studied the waters of Palermo from various viewpoints, we are proposing a journey through the culture, history and legends that flow through its secret waters.