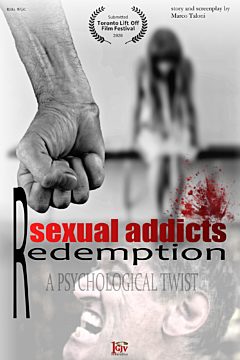 story by Marco Taloni
The man, the woman, the gay man, they have a great life, well established, as many would like to have. But then something inside themselves nurtures a powerful push, which seems controls their behaviors in terms of sexuality. Married with children, in relation-ship, it doesn’t matter they must feed that beast inside themselves to survive. Even, they get out in the night, like a nocturne predator looking for a sexual prey to get satisfied. But not always things come easy and often it’s overwhelming about facing such reality. Until consequences are inevitably coming over bringing down in the hole everything of good that it was built on their lives. In that moment they do not care anything, the demand is in control, even their lives become secondary. But this cannot be ignored, because their lives are getting in the edge of the desperation. Ultimately, they meet in a psychological group session to understand that they are affected by Sexual Addiction. Then get united together to go through into the path of healing.
But It seems not an easy path. They find hard to do it conventionally. In fact, the man falls in a controversial situation that makes him to go even in jail. But the other two, by now, as mates, find a way to help his friend, to be bailed out of jail and deciding to go through a more powerful treatment, that is like a trip into their consciousness.
In this way, they discover in deep the truth, and see their mole in their mind, being witnesses of their own past which created such trouble in their deepest inners and then reflecting into their life.
Ultimately it seems they made it, but the woman, controversially get into a bad experience, that might appear “good”, if before the treatment, but then finally it reveals that such treatment worked, and she gets helped from what appeared to almost become a sexual rape by his unlucky acquaintance.
The man and the woman, ex married people by now, basically abandoned by their companions after they discovered their problems, they find themselves, free by addiction and they make love, a pure love one.