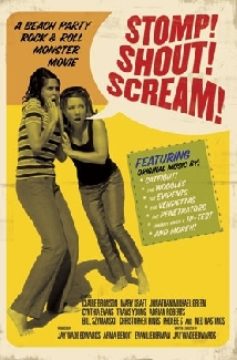 The beach party rock and roll monster movie Stomp! Shout! Scream! is set in 1966 and intertwines the adventures of an all-girl garage rock band with the legend of the Skunk Ape (the Florida Everglades' version of Bigfoot). Theodora, Jody and Carol, collectively known as The Violas, are on tour when their van breaks down in a small southern beach town. Meanwhile, the local police are investigating the disappearance of the parents of a little girl who was found walking the beach in a state of shock. But they are also trying to determine the origins of a strange pile of pungent debris that has washed up on the beach. Scientist John Patterson is called in to help investigate. Both John and a local mechanic, Hector Garcia, fall for The Violas' lead singer, Theodora. She initially shows little interest in them, however, and seems to be harboring a mysterious past. Hector convinces the girls to stay in town when he offers to repair their van in exchange for playing at his party, but a strange and menacing creature appears to be on the loose.