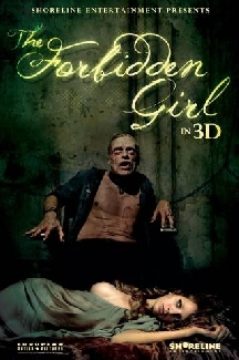 Toby McClift, the teenage son of a fanatical pastor, loses his first love, the mesmerizing Esmy, during a traumatic encounter with a strange creature. To make matters worse, his father blames him for the tragedy because of his “indecent behavior”. The situation pushes Toby into a schizophrenic state and he is committed to a lunatic asylum. Several years later... The director of the asylum showings Toby off as his greatest success: the young man who came to him fully demented now appears to be completely sane and in control of himself. However, it’s clear to us that he still feels guilty about Esmy’s death. What the psychiatric staff don’t know is that all these years he has kept his first love’s keepsake. Upon his release from the asylum, Toby vows to find the creature that killed Esmy. All alone in the world, he applies for a position as tutor at an eerie manor on a lonely hill. Darkness only broken by candlelight. A strange gasping sound echoes through endless corridors of the castle. The ancient owner is lying on her deathbed. She’s almost a mummy. The sound of her shallow breathing under the oxygen mask is like the echo of a drowning child. In return for the position as tutor, the beast-like butler offers Toby board and lodging, as well as an impressive salary. But the young man is confused – whom is he meant to tutor? The butler explains. The old lady has a niece, Laura, who suffers from an extreme allergy to light. She lives in a windowless wing of the house - the forbidden zone.

The moment Toby sets eyes on the innocent beauty he is lost. Laura is the incarnation of temptation and the spitting image of Esmy. She is both infantile and adult at the same time. Her eyes are dark and deep, as though she has lived many lives before. This seductive ambivalence is Toby’s biggest test.

The dark house is full of secrets. The butler eats bugs and his shadow looks like that of a wolf. Doors open for no reason and then slowly creak shut. In the library, Toby finds a Bible that contains a third testament and several stories about witchlike angels. The family in the manor claims to be part of a hippy community descended from gypsies, but Toby has a terrible suspicion: the butler is a werewolf and the old lady a witch. And Laura? Toby believes she is the victim of a cult and has been kidnapped. He tries to question his charge but she evades his questions. Toby wants to believe that he needs to save Laura. But a strange power shift begins to occur between tutor and student: Laura starts to play with Toby’s desires. Slowly, she becomes the teacher and he the devoted student. His mind becomes enslaved to the witch-like nymph. He is now addicted to the forbidden girl.

It’s not just Laura who troubles Toby. With each day he stays in the mansion, the old lady seems to grow younger. Toby’s visions grow stronger. He can no longer tell what is real and what is not. When he looks into Laura’s dark eyes, he thinks he sees the old lady’s pale eyes glistening in their very center. When he touches her perfectly smooth hands, he feels the dry rustle of ancient skin. For Toby, there is only one explanation: Laura is possessed by the old woman. He performs an exorcism to try and free her from the daemon, but the girl does not seem to react. He almost kills her. Full of shame and guilt, he leaves the manor. Laura pursues him and begs him to come back to say goodbye. Heavy clouds part, revealing a perfect full moon. Laura is pure seduction and Toby cannot resist. At the peak of his ecstasy, he realizes the horrific truth: it is Laura who is living in the old woman, but the other way round. Laura is an ancient witch and needs to fuse with an innocent body in order to live. She needs Toby’s purity to give her the strength to resist daylight and be young forever. If Toby survives his only reward will be eternal life on the dark side – as the servant of the forbidden girl.