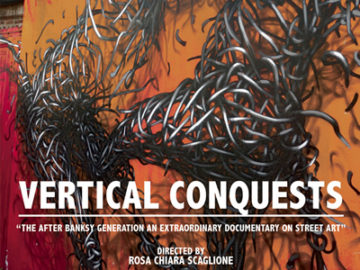 Italy becomes an open air set for international Avant-guard worldwide famous street artists, who bring the spectator into a journey that starts in the streets and ends in a contemporary art museum.

Vertical Conquests is a journey from the street to the most important contemporary art museums made by the new, young a vanguard generation of street artists. The characters, all filmed in Italy, are among some of the most young and influential international street art participants from all over the world. It is a spectacular cinematographic documentary never seen before on street art. Vertical Conquests shows an intimate portrait of this young world famous generation of street artists, all followed and filmed while at work on their astonishing walls and particular surfaces, which bring the spectator into the street art scene from the front door, showing them their intimate artistic scope, made up of life considerations and artistic research. This intimate vision is combined with a narrative prospective, as the documentary is also a journey. The main characters are seen working at their own pace at night and during the day in Rome, choosing freely how to bring their art to the street, which is purely known as Street Art; then, they move on to do very big walls, for what is better known as Public Art, in an international festival in the small beach town of Gaeta, until finally, we meet them aging working in a Contemporary Art Museum in Spoleto, where the documentary thesis unfolds: Street Art is a pure form of Contemporary Art.

The documentary’s point of view always spins off by following the artists at work, in doing so the spectator is introduced to the vast street art scene, as the artists meet and interact with other players in the scene such as Festival Organizers, an Art Curator, a Museum Director, a Gallerist, a Blogger and Citizens who pass by the art works. Artists filmed are from all over the world and they are all so different in their imagery, technically, visually and conceptually. Each one of them is a unique artist and all together they make up the vast and very much not know sophisticated street art world. Vertical Conquests will definitely break away the obsolete idea that street art is just about graffiti or repetitive imagery and poster techniques. It will leave any spectator with a whole new idea of what really is street art, and it will certainty be a unique experience to both watch and carry in one’s memories.

TAGLINE: Art is everywhere, everywhere can be art!

ARTISTS IN THE DOCUMENTARY