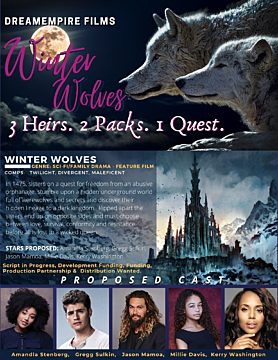 A secret passageway unlocks the path to a hidden world unleashing a power tamed only by a beast just as powerful.

Before time as we know it, sisters on a quest for freedom from an abusive orphanage, stumble upon a hidden underground world full of werewolves and secrets and discover their hidden lineage to a dark kingdom. Ripped apart, the sisters end up on opposite sides and must choose between love, survival, conformity and resistance before all is lost to a wicked queen.

Starring a culturally diverse cast of young characters this film has the potential to rival the Harry Potter/Twilight/Hobbit series and has potential for many sequels if desired.