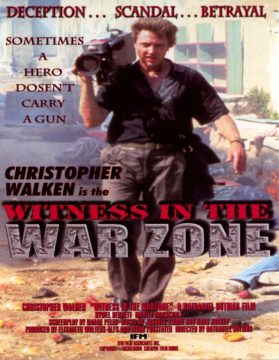 WITNESS IN THE WARZONE

U.S. reporter Don Stevens has been sent out to cover the fighting in Lebanon. Depressed and disillusioned, with his counterpart British journalist colleague Mike, he stays in his hotel until unexpectedly he is promised an interview with atop PLO leader, Yassin. This is a set-up. He is duped into interviewing an imposter who claims the PLO are prepared to negotiate peacefully. Outraged by this deception, Stevens becomes determined to find out the truth. In this quest he is helped by a Scandinavian doctor, Linda, who it emerges is the real Yassin's estranged girlfriend. Along the way, Stevens is hindered by all around him. The PLO threaten him, the Phalangists arrest him and the Israelis ignore him. Tricked and beaten, he gradually uncovers a murder plot, double agents, the bombing of the Phalangists headquarters and, most terrifying of all, a plan to massacre hundreds of civilians. In a story that takes the lid off events in Lebanon, Don Stevens becomes a reluctant hero, and, in doing so, gets the scoop of a lifetime.