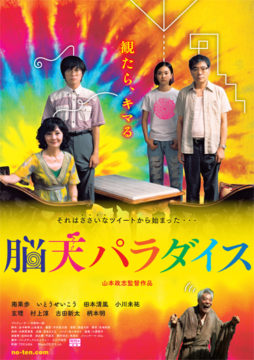 At a large mansion on the outskirts of Tokyo, Shuji SASAYA looks around a room with full of packed cardboard boxes. He has to sell this mansion because of his mistake.

His hermit son, Yuta, brings a homeless into the house, and his daughter has frustrated by her reckless father, and wrote on Twitter, "Let's have a party today at my place. Anyone is welcome!!" A retweet sound is ringing at high speed beside her sleeping.​

The first to come to the Sasayas were moving companies Taichi and Atsushi, and a divorced mother of Yuta and Akane, Akiko. She seems to have hit-and-run away from the moving truck.

A gay couple looking for a wedding venue, elementary school students come to rent a shower, two men cultivating suspicious plants on the premises of the Sasayas, and other peculiar people get together to have a wedding, a funeral and even a festival at the mansion. Both the living and the dying are in the rage of frenzy, the story unfolds.