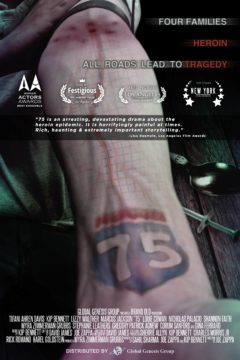 “75” is a hard-hitting present day tragic film dealing with the ​heroin ​epidemic in the United States. "75" is reminiscent of the drug addiction depicted in the cult classic REQUIEM FOR A DREAM.​
Mike Hanson is a survivor of a violent collision, struggling to measure up to his familial responsibilities in the face of debilitating chronic pain that he dulls with prescription painkillers. Leslie Mitchell is a housewife who imperils her children by drowning her sorrows with a needle as her alienated husband carries on an affair. When she receives a call from her husband's adulterous lover, it sends her on a frantic hunt across town for a fix. Summer is a smothered honor student delving deep into chemical indulgences to escape her oppressive mother. Adam, the repressed son of a grief-stricken evangelical family, leads a double life as a prostitute to maintain his heroin habit, while coping with the death of his sister and his hidden sexuality.
These separate lives are connected by their relationships with diligent clinician Dr. Viola Harris, who fights to keep their addictions at bay even as they continue spiraling out of control. Meanwhile, two embittered detectives, Daily and Dekker, confront the futility of their task force's rip-and-run policing style in the mounting war against opiate distribution in the Cincinnati area. Adam's regular john shoots him up with a hot dose and leaves him to be discovered on a dirty motel floor. Not long after, Summer loses her virginity to a charming classmate with whom she shoots up. While Mike finds a night of short-lived bliss with a seductive stranger who offers him a heroin shot that widows Mike's long-suffering wife.
After pushing themselves to the brink of cold-blooded murder upon the capture of Summer's dealer, Daily and Dekker re-evaluate their code of ethics and resolve to hang tight to their humanity. For Dekker, this means leaving the task force to focus on parenting his newbor​n​, while veteran Daily plods on.
Finally, Dr. Harris come homes secure in the knowledge that she managed to save Leslie from an overdose that would have orphaned her children. But her rest is only temporary​. T​he heroin epidemic surges on undeterred as depicted by the final scene in which an overdosing girl asphyxiates as her baby daughter watches.