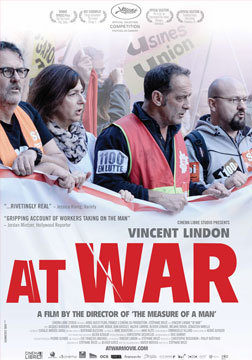 The workers of the Agen plant had put in 470 hours of free labor each over the course of two years, which provided a total of 517,000 hours of free labor (saving over 5 million euros for the company) as a part of the trade for job security. After making such sacrifices, the employees were left with insufficient severance offers and little empathy from management.

Taking to the streets to protest, and initiating a 23-day strike, Laurent Amédéo (Vincent Lindon) and fellow union representatives receive an opportunity to meet with the President’s special adviser who has been tasked with resolving the escalating crisis. The government, who had previously paid state subsidies to Perrin Industries to assist in maintaining their Agen plant, refuse to further intervene after courts ruled in favor of the right of the company to enact the closure.

As the union member employees struggle to unite behind one clear position, parent company Dimke Group presents a united corporate front. Leveraging the power of their refusal to return to work, the employees seek a meeting with the CEO of Dimke Group, who took a salary of 9 million euros the previous year, and oversaw a 25% increase in shareholder dividends.

With no compromise in sight, the employees find an investor to takeover the plant and save their jobs, but fearing the competition, Dimke Group refuse the sale. Running out of ways to display the desperation of his fellow workers, Amédéo takes drastic action.