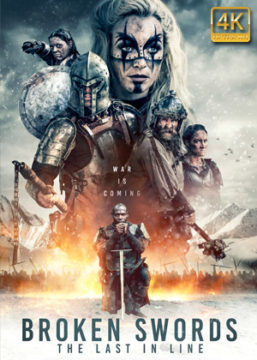 Broken Swords: The Last In Line

The War storms across the cold lands of the north! Bloodthirsty berserkers and colossal frost giants lock horns with golden-eyed crusaders and crazed templar-priests. They battle for their respective kingdoms: the ice-locked Nosck and the sky-worshipping Samada; and the battleground is one small neutral kingdom that lies between them: Ardenmor. Enter the “Broken Swords” — warriors for-hire, mercenaries, scoundrels, and rogues — hired by the Ardenmor lords to protect their territory. As the Nosck and Samada armies destroy the kingdom of Ardenmor, twelve surviving Broken Swords, some of the most elite warriors the northern kingdoms have seen in ages, find brief sanctuary inside a barn in the middle of the forest. Surrounded by enemies on all sides, they must survive until dawn when they can make a break for the safety of the borderlands. Attacked through the night by Nosck warblades, Samada skydancers, and Ardenian rangers, the odds are impossible. If anyone can survive this, they will or they will die trying. And many will indeed die before the night bleeds away into morning light…