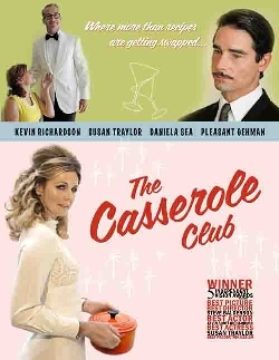 Steve Balderson’s new film, “The Casserole Club” focuses on a group of mod 1960’s era suburban housewives. Close-knit and neighborly, they are all bent on one-upping each other, trying to prove that each is “the hostess with the mostess.” They begin a recipe club, and hold dinner parties, testing out their new casseroles. But when the gatherings become increasingly focused on boozy flirtation, and more than recipes start getting swapped, the story moves swiftly from stylized and campy to a drama about irresponsibility, selfishness, and damaged people.

“The Casserole Club” is an intricate landscape of desolation, unspoken desires, and empty lives laid bare. Raw and uncompromising, it is evocative of classics like “Who's Afraid of Virginia Woolf?” and the more contemporary “American Beauty.” Set in America during the NASA moonwalk, the moon, is a metaphor for the film's tragic heroines, who are filled with mystery, secrets and the untapped potential of people who exist without really living.