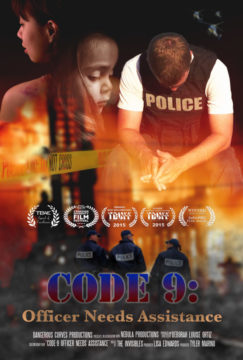 Beyond the calls of "Black Lives Matter" and "Blue Lives Matter" is the unseen reality that our policemen and First Responders are suffering in silence with PTSD due to their job stress. The deadly symptoms of PTSD are affecting every aspect of their personal lives, their family lives, and in some cases ending in suicide. This powerful documentary film details the Police Officers' descent into depression as they feel miserable and alone. The abnormal horrific images that they witness during their careers, the images most people can't even imagine, resurface and haunt them. Family and friends don't understand. The days grow darker and the pain doesn't cease. These Officers need help and they're too proud and too strong to admit it.
CODE 9 - OFFICER NEEDS ASSISTANCE takes an honest in-depth look at how the stress and trauma of police work can lead to PTSD and suicide. More Police Officers die by suicide than in the line of duty. This feature documentary takes us into the world of First Responders to explore the horror of this condition and how these brave men and women are left to deal with it on their own, The film also examines the lack of care in the way most Police Departments handle PTSD once an Officer comes forward to admit he has a problem.
In CODE 9 - OFFICE NEEDS ASSISTANCE, 7 Police Officers are interviewed. These are Officers who suffer PTSD. Some have sunk into alcohol and drug abuse, and some have even attempted suicide. The family unit usually suffers alongside these struggles. It is estimated that 18 to 20% of Police Officers and First Responders are working the streets with undiagnosed and untreated PTSD which makes this not only an individual problem but a major issue for the communities they serve. This documentary will make the public aware that our Officers need more assistance than they're currently receiving.