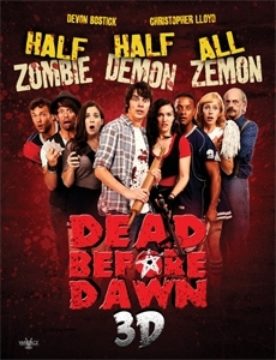 CASPER GALLOWAY'S future is one giant question mark. With only two weeks until College graduation he still lives with his mother, is indecisive to a fault and is one credit away from failing. But just when Casper thinks things couldn't get any worse, he and his friends accidentally unleash a curse that causes people to kill themselves and turn into Zombie Demons, aka Zemons.

Armed with a slew of homemade weapons and a Winnebago, the team races through the night, killing Zemons and fighting time, frantically searching for a way to reverse the curse. But as the Zemon army starts to overpower the team, Casper finds himself with no choice but to face his fears and become the unlikeliest of heroes. Will Casper be able to reverse the curse and save the world, or will he and all his friends be "Dead Before Dawn?"

Shaun of the Dead meets The Goonies in this coming-of-age adventure story that puts a whole new spin on the comedy horror genre.