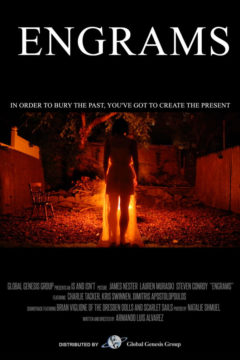 Engrams is a Charlie Kaufman-esque feature that examines the various facets of the human condition, like Being John Malkovich or the Eternal Sunshine of the Spotless Mind. Director Armando Luis Alvarez tells a story about a young man named Joe who quits his job and starts working obsessively on his passion project - a machine that can trigger happy memories. Inspired by the words of a girl from childhood, he secretly builds a prototype in his shared Brooklyn apartment basement. His hope is that he can discover a cure for depression.

Joe’s best friend Ralph is a no-effort mechanic who believes that Joe is incredibly naive for pursuing this task and he takes it upon himself to teach Joe a lesson. Ralph’s lies and manipulations cause unintentional side effects as Joe begins to obsess over achieving results - with himself as the subject.

Joe's girlfriend Sam can be erratic and distant at best, despite her many charms. On a sudden whim, she decides that by burning everything that she owns in a fire in the back yard, she can replace it with solemn hard work to support Joe in his pursuit, whatever it may be. Their emotional distance is their undoing and when the machine starts to work, the past, present and future start to intertwine.

Sam will disappear after recording a mysterious voicemail, leaving nothing but her empty car by a river and an unused passport photo. Joe will embark on a quest throughout Eastern and Western Europe, traveling as far as Romania, Macedonia and Greece in a desperate search for his lost love as he explores the five stages of grief through a series of allegorical encounters with strangers. The very human reality of Sam and Joe's relationship will be re-experienced with Ralph in that dingy Brooklyn apartment basement and the truth will finally come to light.