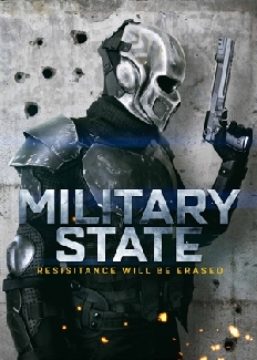 The US has suffered a major terrorist attack. New York, Chicago and Los Angeles have been annihilated by weapons of mass destruction, and the US government has declares martial law. America hires private soldiers, and develops a state-of-the-art drone patrol system to monitor its citizen and locate any new terrorist activities. Patterson Endcott, a computer scientist and drone controller, comes across his own name as a potential terrorist threat in the central command center where he works, due to his religion and ever-increasing discomfort with the morality of his job. He secretly downloads highly classified data and flees with his sister Sam toward the Red Zone desert beyond the watchful eyes of the surveillance drones. Considered a top level security threat by the government, the two are pursued by soldiers and drones to capture them dead or alive. Cornered by a troop of Trackers at the city's outskirts, Patterson and Sam are rescued by the resistance fighters who are on a mission to escort them to safety at their headquarters in the Red Zone. The rebel fighters learn about Paterson and the data he carries from an intercepted communication. To make sure the data doesn't end up in the hand of resistance, US commander issues an order to the Trackers to "erase" Patterson and the entire resistance.