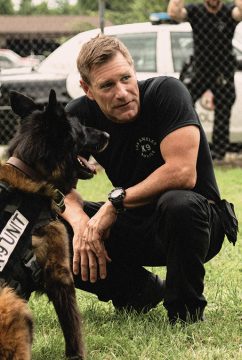 LAPD K-9 officer Jake Rosser (Aaron Eckhart) and his K-9 partner Ace battle it out on the streets of LA’s skid row when they get into a shootout with local drug dealers and Ace is shot dead. In a moment of crisis, Jake tries to get an EMT to look at Ace and assaults him when he refuses. Jake is ordered to take a leave from the force. Still grieving from the loss of Ace, he goes on a journey to find the shooter’s identity but struggles to locate him and the associates. Blocked by Internal Affairs, attacked in the media and muzzled by his own superiors, Jake resolves to go rogue, in an attempt to uncover the truth for himself. But without a badge, Jake hits a painful dead end. So, Jake plays the game within the department, partnering with “Socks”, a violent K-9 with titanium incisors and a mysterious past. Jake and Socks aim to uncover a vast conspiracy that has a choke-hold on the city, and to take vengeance on those responsible.