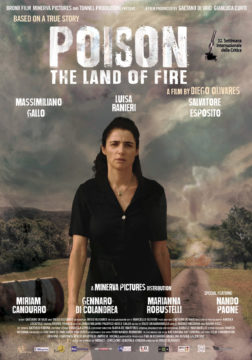 POISON - THE LAND OF FIRES

In a small town near Caserta, a family of farmers faces the outcomes of the pollution and contamination of the area committed by ruthless criminals, through the suffering for Cosimo’s condition and the many issues his illness triggers in the family.

A brutal battle between the looming death and a desperate survival instinct pervades his immediate family and at the same time, the whole village, that is forced to deal with its fear of a crooked and corrupt criminal power, slowly breaking the community apart.

And sometimes, even within the family, the oppressor and the oppressed live side by side: from whom, colluded with the mafia, is giving away land or maybe just pretending not to see or know, to whom is just facing the deadly consequences of this devastation.

The main character’s ordeal stands for the many contradictions of a territory abandoned to itself, where the State has definitively relinquished its role and the only recognized and acknowledged power is the criminal one, and where nature angrily rebels against the endured contamination.