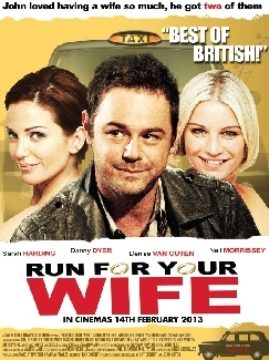 Run For Your Wife

BASED ON THE $300 MILLION GROSSING STAGE HIT. For several years JOHN SMITH (Danny Dyer) has been blissfully married — to two wives. Luckily for John, his working shifts as a taxi driver allows him to keep MICHELLE (Denise Van Outen) happy in South London and STEPHANIE (Sarah Harding) happy in North London.

However, this delightfully satisfying arrangement is suddenly plunged into disarray one night when John comes to the rescue of an old BAG LADY (Judi Dench) being robbed by two young villains and the subsequent police and press interest threaten to expose John's blissful domestic arrangements.

For the next frantic 24 hours John, with the help of his incompetent mate, GARY (Neil Morrissey), desperately attempts to stop his two wives getting involved whilst also preventing the police from discovering he’s a bigamist.