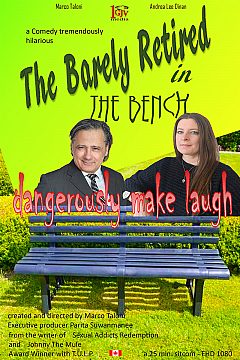 The Barely Retired (The Bench)

SYNOPSIS
The Bench has three different situations happening on a park’s bench. The first sees a sort of a Ladies’ Man, even not so young, but seems confident and with many bragging thoughts toward his capabilities as “Casanova”. His style is slight “back the years” a sort of Saturday Night Fever guy.

Walking in the park with this oddity along with sees a bench where is sitting an individual, a woman seems humble and just relaxed focusing on her reading a book.

The Casanova, imbued with his ideas to be a powerful seducer doesn’t miss the opportunity to approach the seeming pretty lady on the bench.

This part resolves with a series of thoughts for planning the pickup strategy and translating them in true attempts to approach the lady, who was completely ignoring the man. The attempts go on and on for a while until ultimately the woman showing her beauty “unleashing” her hair, stands, and blasts showing also how she is so annoyed by the man’s attempts. But an astonishing surprise for the man is unavoidable when the woman starts to speak out hoarsely with a barytone tone voice, like a big man, with a street talking asking the assumed Casanova to prove himself.

The second happening is related to a woman sitting on the bench who is feeling truly hot. A humble man passing by tries to help her by giving her water. But the truth hot is different from what the man understands. The situation resolves in a back and forth to explain in creative ways how the woman feels hot, but the man still misunderstands, and even at the last seems he was going to “fix it”, but still, he is completely derailing.

The Bench Episode concludes with “sweet and soars” situations, where the two bench encounters seem to want to sit in it since they, both, have a date to wait for.
They achieve an agreement, “the one who has the date coming over first will take possession of the bench”. They both wait, but in the meantime will interfere with each other entering into small arguments, basically getting acquainted in that way with a bit twisted impact.
They unavoidably keep going to speak about their personalities, confronting and arguing it at times, until they open up a bit more about themselves. Their acquaintances didn’t come yet, time is passing. They start to notice such delay, and both become allied against such dates that are late, highlighting the meaning that they’re disrespecting them. The final is that they, inadvertently, discover that they are the acquaintances who are supposed to meet on such a bench.