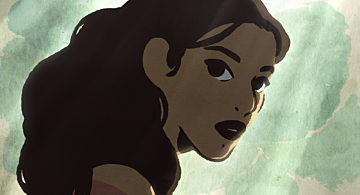 The Swallows of Kabul

Summer 2001, Afghanistan. Taliban are occupying Kabul. The town is in ruins.

Atiq is a jailer at the women’s prison. His wife, Mussarat, is suffering from an illness no doctor can cure. They’ve been living together for twenty years but barely talk to each other now. It gets harder and harder for Atiq to put up with the world he is living in. He finds no hope or comfort with his Pashtun friends, and he begins withdrawing into himself.

Zunaira and Mohsen are living in another neighborhood of the city. They are young, and deeply in love. Neither of them is allowed to work anymore and they live in poverty, selling all they have left to buy food. They are struggling against the oppressing system: Mohsen has refused to teach coranic lessons, and Zunaira would rather stay in their tiny apartment than wear the burqa.

One day, by accident, Mohsen witnesses a stoning and, caught up in the frenzy of the crowd, he throws a stone at the victim. This incident profoundly affects him and little by little, destroys his couple.

The Swallows of Kabul tells the story of these two couples whose lives become inextricably intertwined.