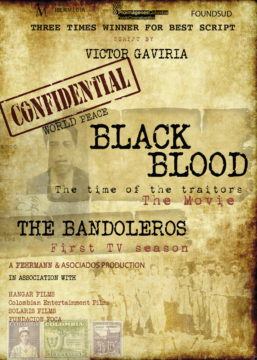 The Time of Traitors

There’s a chain of betrayals, where the one who’s cheating the first ends tricked.

Sergeant Molano Ramos is obsessed to shot down Jacinto Cruz Usma, alias “sangre negra” (black blood), because he raped his wife when she was just a teenager girl. How the sergeant can’t go after him in his illegal territory, at the north of Tolima’s department in Colombia, he searches the criminal’s brother, Felipe Cruz Usma, who lives poorly with his family in a small town inside the Cairo (Colombia), and patiently he set him a trap: He borrows him some money from the bank “Caja Agraria” and when Felipe can’t pay back, he press him to betrayed his brother and won the reward offered to catch him, writing a letter offering to him refuge in his house. After that, Felipe (frightened because of his treason) and the sergeant Molano Ramos, wait him for months, until “Sangre negra” appears one afternoon in his brother’s house with another three brigands. Felipe warn the people of the town and the criminals are found, chased and killed by an army group commanded by Molano Ramos.