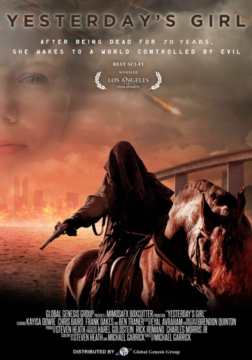 In this dystopian SciFi, a beautiful future world of blue skies, green meadows, and lush forests, Mia, a young woman, awakens to cities burned in the background and a world devastated by a meteorite strike. Mia recalls her own death 70 years ago.

Mia finds another confused young man who also recalls being murdered many years ago. As they search to find answers to why they are alive, they realize they are being stalked by a remorseless adversary who is killing all others in his path. In their efforts to flee their murderous pursuer, Mia and her new friend encounter a new world order of plague, destruction and madness. A world where everyone wants them dead.

In all the confusion of life and death, in the struggle and the chase, Mia’s only hope lies in returning to return to the field where she awoke and facing the adversary who wants her dead.