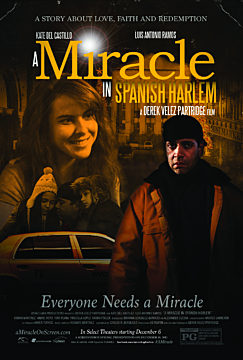 A Miracle in Spanish Harlem

A Miracle in Spanish Harlem is a magical romantic drama following the life of Tito Jimenez, a widower and father of two girls. Despite holding down two jobs, Tito has trouble providing for his family and has lost his faith. Now, with a second chance at love, Tito is forced to make a decision that will drag his family down a trail of love, faith and redemption that begins with a lie and ends with a surprisingly true miracle.