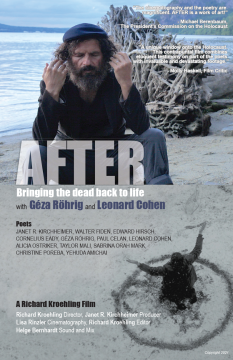 Bringing the Dead Back to Life

A Feature Length Film in Color and Black and White

Can poetry bring the dead back to life? Follow contemporary poets as they perform and examine the role of art in responding to the Holocaust.

AFTER is a compelling, innovative Holocaust documentary. The first of its kind, viewers will watch poetry and cinema combine and combust, creating an exploration of poetry written about the Shoah. Renowned, contemporary poets speak about poetry and illuminate its role in a world that still grapples with genocide.

Conceived by director Richard Kroehling, filmed by cinematographer Lisa Rinzler, and produced by Janet R. Kirchheimer, AFTER is a bold, emotionally gripping visual tour de force. Acknowledging there are no easy answers for the Shoah, viewers will see a film that is ultimately about human resiliency – the power and courage to forge new lives and the value of looking to the past to help create a better future.

Weaving a narrative, poems are carefully chosen and structured; and each poem has its own story, main character(s), and point of view, each acting as a short film that will evoke a range of emotions in the viewer. AFTER also interlaces sequences of music, archival footage, personal photographs, and documents. The power of the words, performances, commentary, cinematic interpretations, sounds, and silences bring the poems to life on screen, offering a modern chronicle of poets examining history and the current day.

Inviting younger viewers born long after the Holocaust into an entertainment-based culture, we believe that AFTER will deliver a deep and penetrating experience that will not be easily forgotten. The film will also appeal to a large audience, including those concerned about Holocaust memory, those who wish to learn about the Holocaust, as well as those interested in history, poetry, cinema, and filmmaking. AFTER will be shown at international film festivals, on television, and via streaming, as well as long term in museums, universities, schools, and cultural and religious centers (JCCs, synagogues, and other houses of worship).

In the film, Géza Röhrig talks about living near Auschwitz in 1986, describes walking through a darkened barracks and says, “This is what WE do…” — meaning not only what the Nazis did but what humanity is capable of — a generous, astonishingly profound moment. This is one of the driving metaphors that creates the world of AFTER. Röhrig’s response remains poignant today as genocide continues. The poems in AFTER still resonate. Lines such as, “Home is anywhere they let you in”, said by one poet’s survivor father, and “…to walk up to history and forget it”, said by a non-Jewish poet after a trip to the former Warsaw Ghetto site, echo what is happening today. The film represents our current world, one burdened by existential threats on many sides; yet holds astonishing promise and possibility.

Director/Producer: Richard Kroehling, principle of Lumen Productions and a two-time Emmy Award winner, director of Albert Einstein: How I See the World for PBS American Masters. His films have screened at film festivals, on television networks, and art museums around the world

Cinematographer: Lisa Rinzler, a multiple-award winner, has shot over fifty feature films, including Pope Francis: A Man of His Word, Pollock, Buena Vista Social Club, Bob Dylan, No Direction Home and has worked with Martin Scorsese and Wim Wenders, among many others.

Producer: Janet R. Kirchheimer is an award-winning, Pushcart Prize nominated poet, and author of How to Spot One of Us, poems about her family from Germany and the Shoah, and the forthcoming book Seduction: Out of Eden.