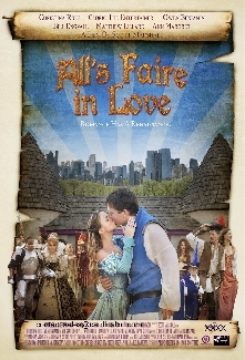 A football jock (Owen Benjamin) is sentenced to participate in a medieval renaissance fair by his college professor (Cedric The Entertainer) in order to pass his class. Set in the world of a Renaissance Faire, "All's Faire in Love" is a light-hearted romp, a romantic camp comedy, falling somewhere between "Shakespeare In Love" and "Meatballs". After years of performing together, a rag-tag theatre troupe is about to lose its prime gig at Ye Olde Times Renaissance Faire when the Faire's owner threatens to hand over their stage to a rival troupe of conceited, classically-trained Shakespearean actors. The gonzo group must revive their act and find help from an unexpected source - their two new backstage hands, a young actor and actress (Christina Ricci) who must overcome all manner of subterfuge and opposition to prove their worth, win the day, and - perhaps - fall in love.