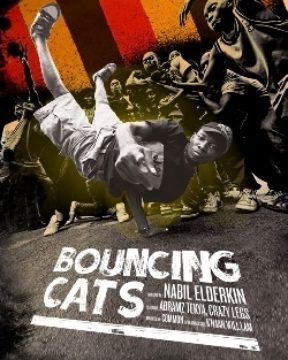 Uganda has been called one of the worst places on earth to be a child. In the South, children face the threat of poverty and disease. In the North, these threats are enflamed by a brutal, mindless war inflicted by the Lord’s Resistance Army (L.R.A.) that has divided families, displaced millions, and led to the abduction and mutilation of tens of thousands of children resulting in the deterioration of identity and culture. Bouncing Cats is the inspiring story of one man’s attempt to create a better life for the children of Uganda using the unlikely tool of hip-hop with a focus on b-boy culture and breakdance. In 2006, Abraham “Abramz” Tekya, a Ugandan b-boy and A.I.D.S. orphan created Breakdance Project Uganda (B.P.U.). The dream was to establish a free workshop that would empower, rehabilitate and heal the community by teaching youth about b-boy culture. Based in Kampala, Uganda, B.P.U. has recently expanded to include permanent classes in Gulu, Northern Uganda. Abramz teaches classes three times a week to more than 300 kids from all parts of the country. Many of the children are homeless, victims of war and poverty, and few can afford proper schooling yet they walk from miles away to attend the B.P.U. classes. As Abramz says, “This is where many people’s pride is. It’s a skill that no one can take away from us.”
Crazy Legs, one of the founding members of the seminal Rock Steady Crew visited Uganda after receiving an invitation from Abramz to teach b-boy classes. What he discovered upon his arrival was both heartbreaking and inspiring. Travelling throughout Uganda, from the southern slums to the war-torn North, Crazy Legs encountered a passion for hip-hop and desire to learn amongst the most squalid conditions.

Bouncing Cats follows Abramz, Crazy Legs, and Breakdance Project Uganda on a journey to use hip-hop culture for positive social change. The film features narration by Common and interviews with Mos Def, Will-I-Am, and K’Naan.