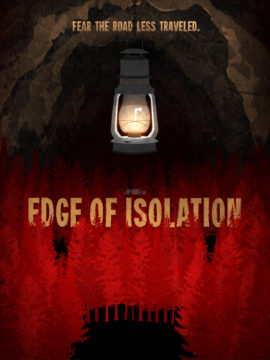 A good natured and trans-national gentleman, Lance (Michael Marcel) and his gun-toting, no-nonsense wife Kendra (Marem Hassler) leave the city for a camping trip. After a horrific car accident, a family of isolationists led by Ivan (Monte Markham) rescues the couple and urges them to stay clear of the evil powers surrounding the homestead. An aggravated escape attempt turns the couple from invited guests into dinner for the family, and forces Lance and Kendra to push the boundaries of their mortality, strength and love for each other. Edge of Isolation examines racial tensions, social norms, and the lens through which we all examine opinions opposed to our own. Frightfully tensioned and eerily creepy, this thriller/horror takes hold of your heart and doesn't let go.