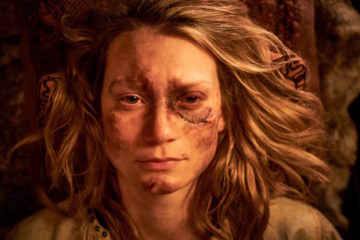 In a visceral and dynamic live-action reinterpretation of the famous 16th century puppet show, writer-director Mirrah Foulkes turns the traditional story of Punch and Judy on its head and brings to life a fierce, darkly comic and epic female-driven revenge story, starring Mia Wasikowska.

Famous puppeteers Judy and her husband Punch, live in the peculiar and unforgiving town of Seaside; a place gripped by a frenzy of witch hunts and hangings. The townspeople revel in the drama and brutality of the trials and executions, while Judy and Punch endeavour to use their show to escape, with their new baby, to loftier means.

However, temptation can be found in every dark corner of Seaside, and the charismatic Punch succumbs to the seduction of the local tavern; and the women, ale and adulation that await him there. Despairing at her husband’s weakness, Judy forces the hungover Punch to focus on his responsibilities and leaves him to mind their baby for a morning, the repercussions of which are disastrous for all.

The brutal consequences see Judy saved by a band of outcast heretics in the depths of the nearby forest. It is here she plots her vengeance on Punch and the town of Seaside, and puts the legend of Punch and Judy to rest, once and for all.