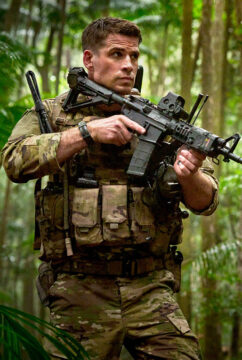 Reaper (Russell Crowe) is an Air Force drone pilot supporting a Delta Force special ops mission in the South Philippines. After the mission goes terribly wrong, he has 48 hours to remedy what has devolved into a wild rescue operation. The Tier-One team, led by Cpt. Sugar (Milo Ventimiglia) and Sgt. Abel (Luke Hemsworth), re-deploys on the battlefield to return and retrieve their captured man and the asset, both now hostages. They are joined by Kinney (Liam Hemsworth), a green Air Force JTAC officer, who is thrust into the middle of a high-stakes extraction and must step up immediately to support these top-level operators. As the eyes of the ground mission, Reaper keeps his drone sharp, but it suddenly turns upside down and becomes a full-scale battle when the team is discovered by the enemy. Kinney’s team has been killed, so Reaper guides him strategically and carefully back to a rendezvous point. Completely alone and being hunted in enemy territory, Reaper becomes Kinney’s lifeline and goes above and beyond to get the kid back to safety. But fate has a different idea when Sugar, still alive, catches up to Kinney and convinces him to go back in with him. In the Land of Bad, you don’t leave anyone behind.