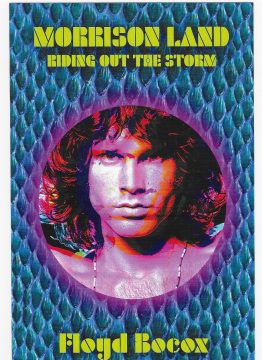 Morrison land riding out the storm

Who is Cliff Morrison, the love child of his mother Lorraine and the rock god Jim Morrison of the Doors.

Why have so many individuals believed in Cliff's Morrison's paternity after meeting him or hearing him perform as an artist. His voice sounds like Jim and his poerty is uncanny with his lyrics and gestures with long red hair even have a resemblence of Jim and Pamala together.

Cliff marries Marlon Brando's niece and after their divorce Cliff seduces a married mother of two children, Lisa Walsh and has a child from her and named her after Jim's mother Clara Morrison.

This story has many aspects from a murder mystery, beytrayal, kidnapping, love story gone bad, destruction of a family, prison life, action with a few police incounters, drugs, drama, who posined Lisa to take her baby from her.

The Synopsis that I have has so much content that this would take a lot of pages to fulfill.