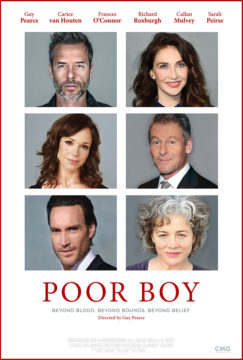 After Jem Glass wakes up in the hospital on his seventh birthday from an accident, he tells his parents that he, in fact, belongs to another family. Bewildered and confused, his parents (O’CONNOR, ROXBURGH) struggle to understand their son’s disturbing news… that he is claiming to be Danny Prior (PEARCE), a man who died seven years earlier, leaving behind his wife (VAN HOUTEN), mother (PEIRSE), and younger brother (MULVEY). Confronted with Jems’ mysterious announcement, both families are pulled into the reality that this boy may be the man who he claims to be even though it challenges what everyone believes to be “real”. While one family battles with the absence of their seven-year-old boy, the other refuses to believe their deceased Danny has really returned. As the truth unfolds, the families must come to terms with secrets they had once buried and the lies that covered up the pains of their past.