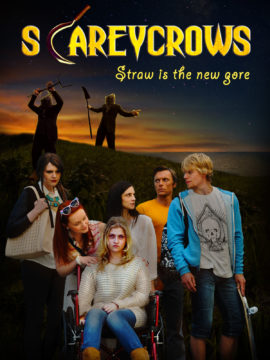 When Amy’s boyfriend, Ryan, asks her to leave the sleepy seaside town of Sidcombe, where they have grown up, and move to London she refuses to consider the idea.

But Amy doesn’t know that Ryan has a dark secret.

Every year, Sidcombe holds a Scareycrow Festival to celebrate an ancient legend about a local witch who brought scareycrows to life to protect the village.

Now, a descendant of the witch is bringing scareycrows to life again, but this time they are being used to carry out a series of gruesome murders.

When Cassie, the local bully, is left paralyzed, after a mysterious accident, Amy thinks she has nothing more to fear from her.

However, it is only when a severed head is pulled from the village stream, and her friends begin to disappear, that Amy discovers all the victims are connected and realizes that, unless she confronts her greatest fear, Ryan will be the next victim.