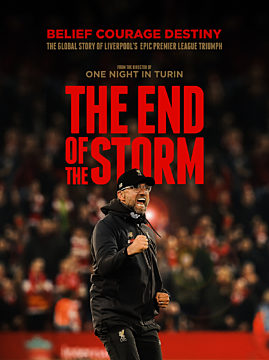 The End of The Storm

“The best football is always about the expression of emotion.” - Jurgen Klopp

Featuring unprecedented access to Liverpool Football Club, THE END OF THE STORM is the gripping featurelength inside story of the 2019/20 Premier League winning season.

In a year when all sports came to a standstill, fans of Liverpool Football Club finally saw their team lift the trophy that had eluded them for 30 long years. Seen through the eyes of manager Jurgen Klopp, his first team players including Jordan Henderson, Sadio Mané and Roberto Firmino, join passionate Liverpool fans from around the world - THE END OF THE STORM celebrates one of sport’s most historic triumphs.