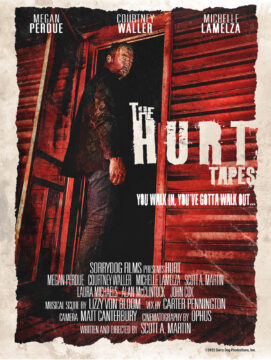 Red Blodbath aka Michael recorded over a 1000 videos over the years with help from his brother Nash. Videos in which they HURT people both physically and mentally. Stephanie Milner was one of those people. It's been over 20 years since the first video was made. The Hurt Tapes is a story that eplores the consequences of the Stephanie Milner video.

A young woman (Rachel Milner) is in search of her father that she has never met. Her father (Red) raped her mother (Stephanie) years ago which led to Stephanie's breakdown and a life inside a mental institution. Wanting to understand just who her father really was, Rachel sets out with 2 close friends to find him. Going deep into the Appalachain Mountains, Rachel and her friends encounter things they never would have imagined in their worst nightmares. Just before heading into the deep woods they are warned by a carnival worker that if "You walk in, you gotta walk out". Despite the warnings from her mother and others, Rachel continues on into the mountains seeking her father and answers to her questions. What they eventually find is the stuff nightmares are made of.