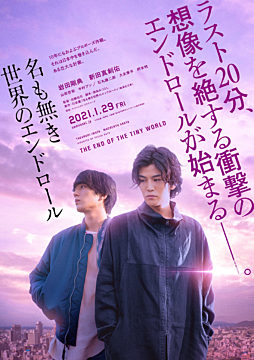 Two boys, Kida and Makoto grew up together because they have in common that they don’t have parents. And a transfer female student ,Yotchi also gets along with them because she has a similar background, which is that they come from not such a good home environment. They spent school life to support each other. There is nothing too special, but they have been living happily. But at the age of 20, Yotchi disappeared. Then Lisa, the daughter of a politician and a top model, appears in from of two men. Makoto takes an unusual romantic interest in Lisa, who lives in a different world from them, and asked her out to dinner, but she does not take him up on it at all. Kida warns Makoto to give up on her because they live in different worlds, but Makoto quits his job and vanishes without a trace.

Two years later. Kida goes into the underworld to find Makoto, and they finally meet again. Makoto worked hard to earn money in order to make Lisa worthy of him. When Kida learns of Makoto's obsession and his "reason" for doing so, he vows to risk his life for his best friend. From then on, Kida becomes a negotiator and Makoto becomes a business owner, rising in both sides of the society. Then, on Christmas Eve, Makoto asked Kida to help him for the largest surprise to make a marriage proposal. However, it is a "Master plan" involving the whole of Japan that two men have been planning for 10 years. Do the two men’s deep passion reach her!?