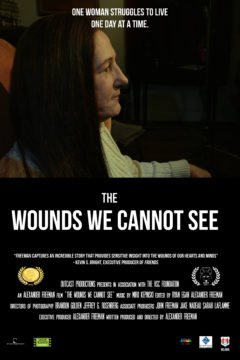 The Wounds We Cannot See

The Wounds We Cannot See, tells the gripping story of former US Navy Airman Nancy Ross of Hingham, Massachusetts who was falsely adopted because of a family secret she never knew. Ross was violently raped during her service in 1988 and has since struggled with addiction, mental illness and depression. She continues to battle Post Traumatic Stress Disorder as a direct result of her attack and subsequent abusive relationships. While Nancy has undergone extensive therapy since her honorable discharge from the Navy she still suffers from addiction and mental illness living in constant fear of the future.