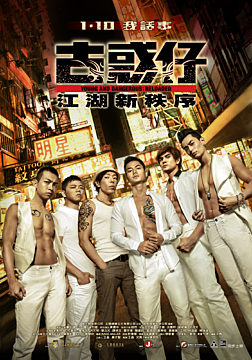 On a dark night in Mongkok, May, the cousin of Dai Tin-yee (Dominic Ho), was gang-raped to death by Med King and his men. The furious Tin-yee, together with his buddies, Ho-Nam (Him Law), Chicken (Oscar LEUNG), Pou-Pan (Jazz LAM) tracked down Med King to avenge May’s death. As Med King was under the wing of Ugly Kwan (Sammy SUM), a leader of the Hung Hing triad, Kwan gave orders to get rid of Ho-Nam by all means.

In the desperation of Ho-Nam and his friends being attacked one after another, they sought help from Uncle Bee (Paul WONG), in hope that they could join under his wing, which kicked off their gangster life. Ho-Nam was assigned to be the bodyguard of a billionaire’s daughter Lorraine Lam (Michelle HU). He had made an impression on Lorraine. Meanwhile, Anna (Winnie LEUNG), the girlfriend of the boss of Hung Hing, Chiang (Pal SINN), and Kwan were having an affair and planned to get rid of Chiang.

How did Bee fall into Anna and Ugly Kwan’s trap which led to the tragic death of his entire family? Could Ho-Nam avenge Bee’s death finally? Would Ho-Nam and Lorraine have a happy ending?