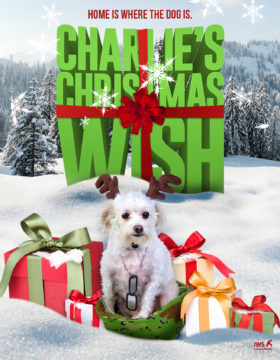 Coming home from his last deployment, Sergeant Major John Frost arrives a month early due to PTSD incident and is happy to be home for Christmas. He finds his wife, Jill and son Jimmy too busy to give him the welcome he anticipates. In his absence, they have adopted a dog - a little dog named Charlie.

Jill, owner of Jill's Cakes And Bakes, has been struggling to pay the bills and has taken on too many holiday parties for her catering business. John finds solace with the other veterans at the Moose Lodge until one day when Charlie finds their friend and retired veteran Hank in a nearby park after having heart attack.

John finds solace with fellow vets at the Mosse lodge until Hank, a retired Vietnam vet, is found by Charlie having suffered a heart attack and then is discovered to be homeless living in tented camp with Captain Jack. John finds his porpose as he rallies friends,family,and community to build a new house for the vets and give them a warm Christmas Eve and a new start on civilian life.