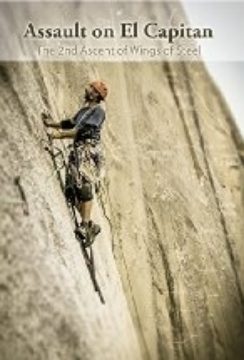 Ammon McNeely is a: Skydiver, Wing Suit Pilot, Skateboarder, Slack Liner, BASE Jumper and Big Wall Climber. With over 75 El Cap ascents by 62 different routes Ammon is one of the fastest and best-known climbers in the world. Holder of 15 speed climbing records on El Capitan. Known as The El Cap Pirate, Ammon is carrying on the tradition of great adventurers and iconoclasts.

In July of 2011, Ammon and Kait set out to climb the never repeated route of Wings of Steel on Yosemite’s El Capitan. Wings sat unclimbed since the first ascent in 1982. Shrouded in controversy and with a bounty waiting for the second ascent team, there seemed to be no better person to climb it than Ammon.


Logging over 500 feet of falls, and dislocated shoulder Ammon presses on up the wall. Kait sits anxiously on a portaledge watching the person she loves suffer fall after fall. For 13 days Ammon and Kait fight on and up.

The story of Wings of Steel is part legend and part myth. The first ascent team spent 39 days climbing the controversial route. The result - death threats, physical assaults and a slander campaign that polarized the climbing community for over 30 years. Combined with footage shot during their ascent and told through interviews with the first ascent team, their detractors, as well as Ammon and Kait, the truth about the most controversial climb in Yosemite history is finally told.