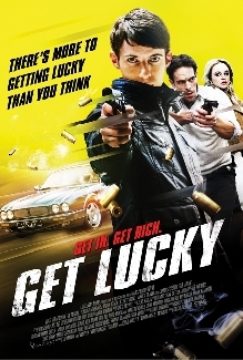 Back in the UK after a year of traveling abroad, Lucky (Luke Treadaway), meets stunningly gorgeous Bridgett (Emily Atack) at a surprise party thrown by Lucky’s older brother, Raphael. But before he can get ‘lucky’ with Bridgett, he is persuaded by his old buddies, Kirby (Ali Cook) and George (Richie Campbell) to do them a favor. Dragged into a criminal enterprise without his knowledge, they are suddenly pursued by two very serious criminals, Sebastian (Craig Fairbrass) and Kramer (Terry Stone). Unwittingly, Lucky ends up with the money from his buddies’ ‘job’ but is also separated from the others. Later, thinking it’s his buddies at the door, he opens it only to find Sebastian and Kramer. Their ultimatum: return the money or he’ll be killed. When he turns to his brother for help, he’s told they are planning another job – robbing an illegal casino that belongs to the men responsible for the death of their parents. Lucky wants in, thus setting up more plot twists and turns than a speeding getaway car.