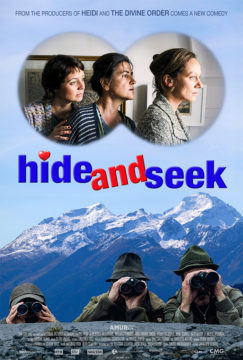 After 20 years of marriage, Mona and Gieri have lost their spark. Deciding she wants to rekindle the flame, Mona seeks help from the village’s new priest. Instead of giving her the sort of pastoral advice she was expecting, he encourages her to employ more worldly means in the practice of love. But that’s easier said than done. Gieri is wrapped up in preparations for his upcoming “Hunt of the Year” as well as distracted by a love-kindling of his own. He takes no notice of his wife’s efforts. Mona then discovers Gieri’s well-kept secret affair is actually with her best friend! With her world turned upside down, Mona moves out to open her own business with his money. While everyone takes notice, the town doesn’t know the real reasons behind their separation. As the women in the village seek more advice from the new priest, the men are running scared and are sure the priest has the women under a spell to conspire against them. Will the truth be finally revealed or will they continue playing Hide and Seek in this Swiss village?